Crew members on the medical helicopter that crashed Jan. 11 in Delaware County, Pennsylvania, told investigators that they were "pinned to the ceiling" as the chopper flipped, perhaps multiple times, before crashing, the preliminary NTSB report says.

Crew members aboard the helicopter that crashed in a Delaware County, Pennsylvania, neighborhood earlier this month told of a harrowing midflight experience before the emergency landing that included possibly multiple rolls of the aircraft midflight.

The onboard medic and a nurse caring for a young child being transported by the medical helicopter said in a newly released report by the National Transportation Safety Board that there was a "loud bang" about 10 minutes before the aircraft was expected to land at Children's Hospital of Philadelphia.

Both the nurse and the medic were out of their seats tending to the child patient when the bang occurred and the noise was followed by some jarring movements of the helicopter, the NTSB report said.

"The medic said that the helicopter rolled inverted, perhaps multiple times, and that he and the nurse were 'pinned to the ceiling' and internal communication was lost," the report said. "The helicopter was leveled, the patient was secured, the crewmembers secured themselves in their seats, and they braced for landing."

The preliminary report was released recently in the Jan. 11 crash and a formal, full investigative review will be released months from now. The NTSB typically takes 12 months or more to complete a full investigation of transportation incidents.

Incredibly, none of the four people aboard the medical helicopter suffered serious injuries.

Upper Darby Police Superintendent Timothy Bernhardt said at the scene on the day of the crash, "It's an absolute miracle what you see behind me."

NBC10 obtained the 911 call from a nurse on board a medical helicopter that made a crash landing outside of a Delaware County church. All four people on board, including a baby girl, survived the crash. NBC10's Deanna Durante has the details.

No trees or utility wires were struck by the pilot, who was the only person to suffer any injuries in the crash, officials said. The infant patient was eventually taken to Children's Hospital after the crash.

The pilot has volunteered to speak with the NTSB, but the report indicated that he had yet to because of his injuries.

She was referring, in part, to the church where the helicopter crash-landed next to in the heavily populated area of Drexel Hill in Delaware County. The crash site is just outside Philadelphia, about a mile from Upper Darby High School.

The Drexel Hill United Methodist Church at Burmont Road and Bloomfield Avenue was spared any damage from the crash, as did numerous houses across the street.

The pilot later told NBC10 that he had "God as my co-pilot."

Five days after the crash, police and fire personnel, and the medical team at Presbyterian Hospital in Philadelphia gave the pilot, Daniel Moore, a round of applause as he exited the doors of the hospital.

“I’m kind of loopy, as you can probably imagine. I’m just feeling fortunate. I had God as my co-pilot that day, and we took care of the crew and we landed in His front yard, so that was kind of nice," Moore said while strapped to a stretcher before being loaded onto an ambulance to take him home. 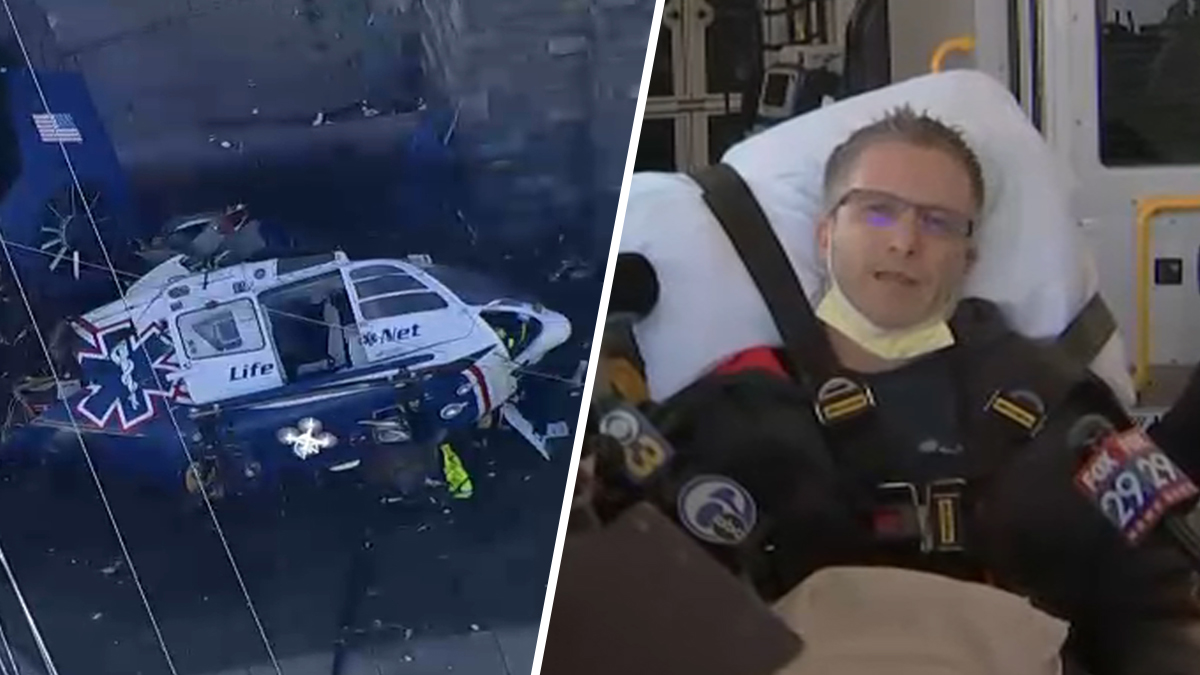 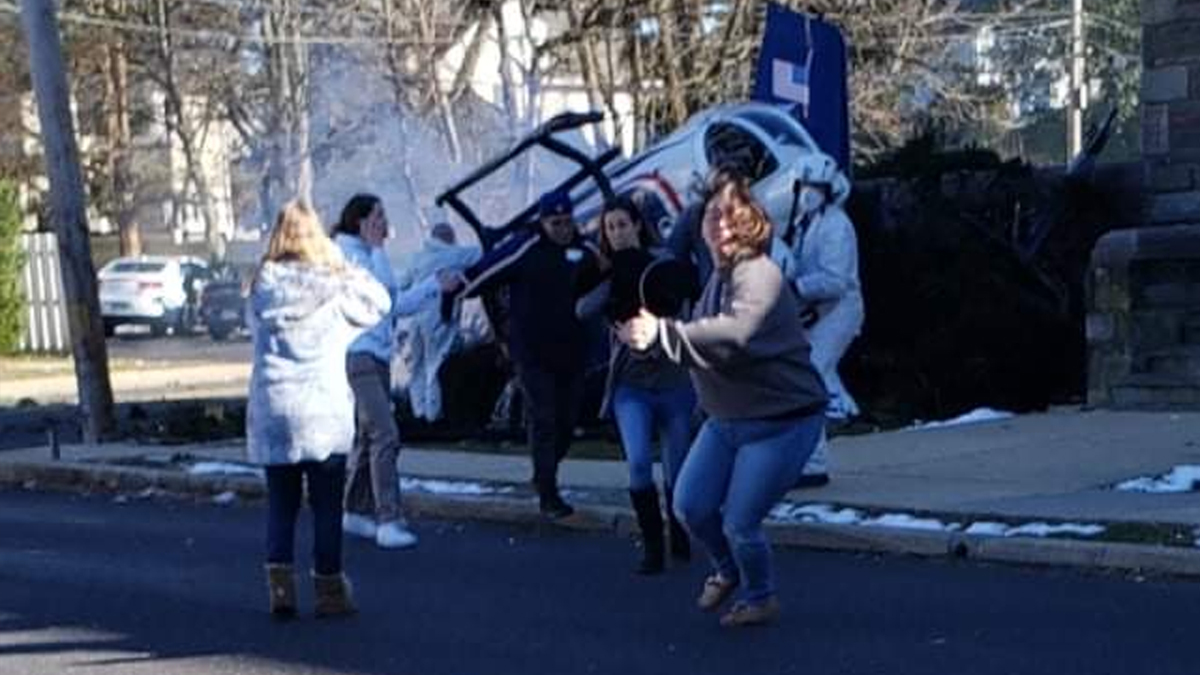 ‘I Need an Ambulance': 911 Call Reveals Moments After Helicopter Crash

The helicopter is owned by Colorado-based Air Methods Corp, which provides air medical transport. The company operates in 47 states and has more than 400 helicopters and fixed wing aircrafts.

The chopper was built in 2006 and was owned by Wells Fargo Bank until 2014 when Air Methods Corp bought it.

It usually flies two or three times a day between Hagerstown Regional Airport in Maryland and the Lost Acres airport in Chambersburg, Pennsylvania according to data from FlightAware which tracks aircrafts flight logs.

The NTSB report indicated that the helicopter lost altitude more than once.

"About 12:43 p.m., the helicopter descended and then leveled about 2,800 feet (mean sea level), then subsequently descended and leveled at 1,500 feet (mean sea level)," the report said. "At 12:53, the helicopter track depicted a series of heading and altitude excursions. The plots depicted altitudes between 1,700 feet msl and 1,250 feet msl before the target disappeared."

The chopper was last certified in 2014, according to the Federal Aviation Administration. It’s current certification was set to expire in 2023.

A spokesman for Air Methods said in a statement that the helicopter is an EC-135 aircraft and part of the LifeNet medevac program.

"The FAA and NTSB have been made aware of this incident and investigators are enroute to assess the situation. Our team will cooperate fully with their efforts to assess the cause of this unfortunate accident," Doug Flanders of Air Methods said in a statement. "Privacy rights with regards to those on board the aircraft will be honored, and we will not be sharing any additional information."