A Philadelphia man who prosecutors said stabbed and ran over his ex-girlfriend in the parking lot of her suburban workplace has been sentenced to life in prison without possibility of parole.

Lawrence Crawley, 36, apologized Monday in Montgomery County Court before the mandatory sentence was imposed, The Philadelphia Inquirer reported. In January of last year, jurors had convicted him of first-degree murder in the August 2018 death of 33-year-old Angela Stith.

Prosecutors said Crawley smashed the window of the victim’s car at the Whitemarsh Township, Montgomery County, parking lot, caught her as she fled, stabbed her about 10 times and then drove a sport utility vehicle over her repeatedly as co-workers rushed to try to help. Authorities said he then fled toward Pittsburgh and was arrested by state troopers on the Pennsylvania Turnpike after setting himself on fire.

Crawley told the court that the attack stemmed from an argument and wasn't premeditated, an assertion that the prosecutor contested. Crawley and defense attorney Carrie Allman noted his Army service and said his young daughter was also a victim since he is no longer able to care for her.

“There’s not a day that doesn’t go past that I regret the whole incident,” Crawley said. “I know my actions have caused a lot of hurt for a lot of people, and all I can say is I’m sorry.” 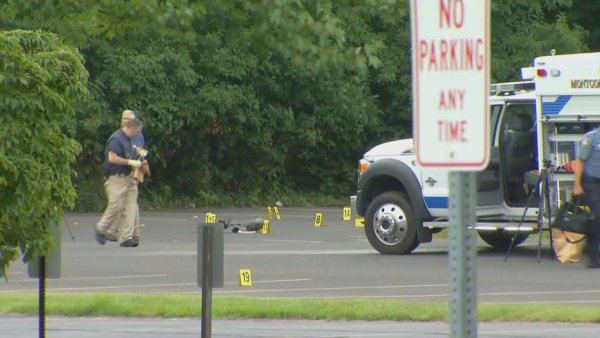 Killer Found Guilty of Stabbing Ex, Repeatedly Running Her Over Outside Work

Killer Stabs Woman in Back, Runs Her Over ‘Again And Again' at Montgomery County Office Park, DA Says

Judge Thomas Branca, however, cited a lack of remorse on his part and said the facts of the case cried out for the maximum term, since the defendant posed a danger to women and the rest of the community.