The end of a long case that had tested the limits of politics as usual in Philadelphia came Monday, with a verdict that ruled a powerful labor leader and a sitting City Councilman were both guilty of conspiracy and fraud.

Electricians' union leader John "Johnny Doc" Dougherty was found guilty Monday of 8 of 11 charges that he faced in the federal corruption trial. And Philly City Councilman Bobby Henon was found guilty of 10 of the 18 charges he faced.

Bobby Henon and John "Johnny Doc" Dougherty have been found guilty of conspiracy and multiple counts of fraud in a federal corruption trial. They were also found not guilty of other charges. Sentencing will take place in February. NBC10's Lauran Mayk has been following the trial since its beginning and has the latest on what this verdict means.

Neither showed any reaction in court, staring straight ahead as the verdict was read, said NBC10 reporter Lauren Mayk.

Dougherty, of South Philadelphia, is the longtime business manager of IBEW Local 98. He had been charged with buying influence at City Hall through former union member Henon, who serves on City Council.

The councilman, representing parts of Lower Northeast Philadelphia, was first elected in 2009, but continued for years to collect a $70,000 salary from Dougherty’s union.

The two face a maximum 20-year sentence on the most serious charge. Sentencing for both Dougherty and Henon is set for February.

"Today's verdict is a strong message to the political power players of this city and any city that the citizens of Philadelphia will not tolerate public corruption as business as usual," Jennifer Arbiter Williams said at a press conference. "It is not just the cost of doing business."

"John Dougherty is not entitled to, and had no right to, pull the strings of official city business as if he were elected to office," she said. "And Bobby Henon was not elected to represent Local 98 or John Dougherty's interests on City Council."

In a statement released Monday afternoon, Dougherty said he planned on appealing the verdict.

Following the verdict of the federal corruption trial and guilty verdict of John "Johnny Doc" Dougherty and Bobby Henon, many still have questions on what the implications and next steps. NBC10's legal analyst Enrique L1 Latoison talks about the potential impacts.

“Justice was not served today, and I can’t tell you how disappointed I am by the jury’s decision," Dougherty wrote. "What Councilman Henon and I were found guilty of is how business and politics are typically and properly conducted. I will immediately appeal and have every confidence that I will prevail in the Third Circuit Court of Appeals.”

The two will remain out of jail until sentencing, though the prosecution argued to keep them behind bars Monday by playing at tape of Dougherty talking about fighting, saying, "I took the kid out in the middle of the street myself and beat him up.”

He said his priority was getting his wife, who is chronically ill, to aquatherapy and to get both of them booster shots.

And then he made what appeared to be a reference to the tape played at the end of court Monday. "All you need to know is the action that was taken at the very end … c'mon guys, nobody thought that was right."

'He's on my payroll'

But it wasn't clear until Monday if a jury would consider the behind-the-scenes workings of Dougherty and Henon city politics as usual or proof of conspiracy and fraud.

The verdict of the federal corruption trial involving Bobby Henon and John Dougherty was handed down Monday. Both men were found guilty of a number of charges. NBC10's Rosemary Connors shows us the political implications of the verdict.

Dougherty and Henon both vehemently defended their actions, arguing that Henon was not bought by Dougherty as federal prosecutors charged. Instead, they said, both were acting in their own self-interests.

During the trial, jurors heard wiretaps of his phone calls to Henon, Mayor Jim Kenney and others. And prosecutors closed their case Tuesday afternoon by playing a conversation between Dougherty and the mayor in November 2015, the month he took office, according to The Philadelphia Inquirer.

During the call, Dougherty says of Henon, “He's on my payroll.”

Following the conclusion of this trial, Dougherty faces a second trial on charges he and others embezzled more than $600,000 from IBEW Local 98.

Dougherty, a major force in Pennsylvania politics, has steered more than $30 million over the years to mostly Democratic candidates, and his brother sits on the Pennsylvania Supreme Court. 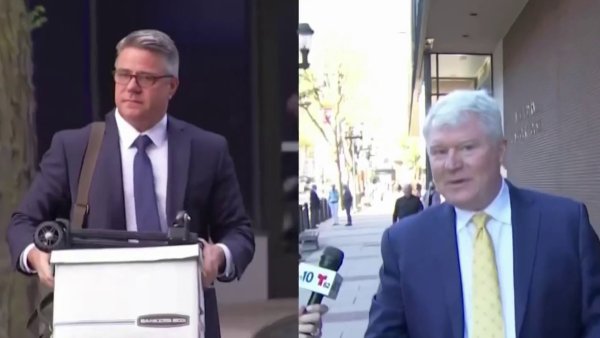 What Wiretaps at Federal Corruption Trial of Dougherty, Henon Included

What Is Johnny Doc Known for in Politics?

Pennsylvania’s congressional delegation: Look no further to see the scope of Johnny Doc’s power than Pennsylvania’s current delegation serving in Washington D.C. The dots aren’t hard to connect. A.) John Dougherty’s union spends hundreds of thousands of dollars through political action committees on the 2015 campaign of his brother Kevin Dougherty, the state Supreme Court justice. B.) Kevin, a Democrat, is elected to the Pennsylvania Supreme Court in an election that gives Democrats a 5-2 advantage on the state’s highest bench. C.) The court rules that the Republican-majority Legislature’s congressional map is unconstitutional, and must be redrawn. Eventually, it redraws the map itself. D.) Democrats rejoice, then take nine seats in the 2018 midterm election.

The cost of soda in Philly: Fellow indictee Henon was the promoter of a soda tax back in 2015, even before Jim Kenney was elected mayor and ushered through what became Kenney’s defining legislation: the sugary beverage tax. It is helping pay for universal pre-K and a $500 million initiative called Rebuild, which is dedicated to renovating city rec centers and libraries and involves lots of union labor. Henon sits on the Rebuild board.

Blue-Collar pay: Johnny Doc is not only in charge of IBEW Local 98. He also sits atop the Philadelphia Building Trades Council, an umbrella group for dozens of labor unions. Whether it’s ratmobiles, or behind-the-scenes legislative efforts, Johnny Doc has kept developers and big corporations from subverting organized labor’s wages with non-union workers.

Semi-dark money in local elections: Dougherty deploys political action committees, also known as PACs, as conduits for donations to candidates across the spectrum, whether it’s for mayor, congress, or even district attorney, according to campaign finance reporting records.

Some employees of NBC10 are represented by IBEW Local 98.