The Philadelphia neighborhood along the Schuylkill River has long had a vibrant Main Street that's occasionally flooded. One longtime local official says "gentrification is underway."

DeWhite Dawkins Sr. and his son stood several yards from a still-raging Schuylkill River on Wednesday as they waited for a chance to get back into their flooded Manayunk townhouse.

Workers at Apex Apartments, where the Dawkins family rents one of several townhomes at the property, were clearing out the mud and water that remained from flooding late Tuesday into early Wednesday.

"I heard this is the third time it's flooded," Dawkins said of the area along Flat Rock Road off the intersection of Main and Leverington streets. "It (last) happened three years ago, but they said this is the worst."

The father and son sat on the wall of a new development next to Apex. It's called The Locks, which consists of 60 townhouses. The most expensive of the five-story homes have sold for $1 million, one of The Locks' developers, Devin Tuohey of Concordia Group, said.

The scene on Venice Island in Manayunk captured the essence of local real estate here in 2020. The Northwest Philadelphia neighborhood's Main Street corridor is as desirable as ever, even as portions of it were shut down amid the flooding from Tropical Storm Isaias.

Most of the bars, restaurants and boutique retail shops avoided damage this week. Still, the river once again flooded Manayunk Brewing Company and swamped numerous cars that were left parked in low-lying stretches of Main Street.

The newest and most expensive development in Manayunk stayed above the river, however. Tuohey said his company, which partnered with D3 Developers on The Locks, trucked in 45,000 cubic yards of fill to raise the level of Venice Island between 8 and 10 feet where townhouses are located.

"We knew there were certainly some risks and it had to do with flooding in the past," Tuohey said. "It was a major issue from the start and we recognized that. So only way to move forward was raise the grade of the site and mitigate the concern for flooding."

He added that "what happened on Tuesday into Wednesday, I think, it justified the planning."

On Manayunk's Venice Island, The Locks has joined Apex and another large apartment complex, The Isles. The island was created in the 1800s when a canal was dredged to allow for barges to navigate the Schuylkill while avoiding rocky currents in the middle of the river. 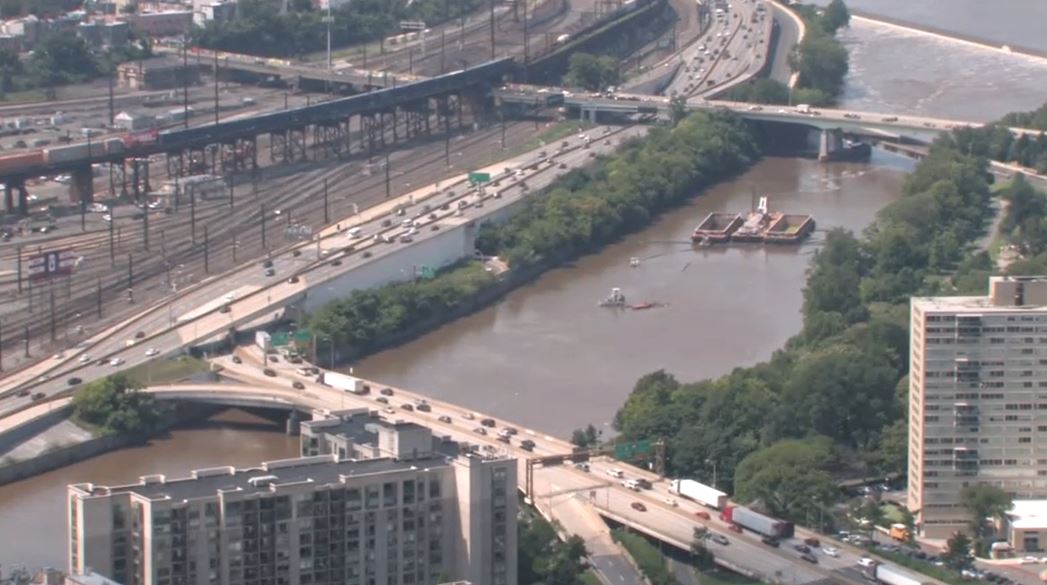 I-676 Reopens After Tugboats Pull Barges Away From Bridge The barges ran materials and products for the mills that operated between the river and Main Street. The neighborhood of Manayunk is named after the river, which the native Delaware Indians called Manaiunk, or "rushing and roaring waters."

During the region's industrial era, mill workers built two-story row houses on the hills rising above Main Street, according to Kevin Smith, longtime president of the Manayunk Neighborhood Council.

A bit further up the hill as Manayunk approaches the Roxborough neighborhood, mill owners built mansions, Smith said. The character of the neighborhood is still visible, but is evolving as developers replace the old row houses with larger, taller versions, he said.

And then, of course, there is the development of Venice Island.

Smith has been a part of negotiations with all three of the large developments build on Venice Island since the late 1990s. He said the community has always sought to have large-scale development take into consideration flood risk and apartment density, in part because access to the island is limited.

The expensive waterfront developments and pricier hillside rowhouses are again reshaping Manayunk, which for a couple decades has been known for college pubs and young renters.

"The gentrification of Manayunk is under way," he said.

He added that its perception is also changing.

"As a college drinking town, that aspect is waning a bit," Smith said.

Dawkins Sr., one of the residents of Apex, said his family escaped the flooding and were staying at a nearby hotel until they were given the okay to return to their home. Apex did not return a message seeking comment.

"It got to four stairs high inside," his son said.

The father said insurance would cover whatever was damaged.