Cicadas, Lanternflies Could Cause a Tricky Summer for the Bug-Averse

A local entomologist at Drexel tells us it's unlikely the two bugs will interact.

Our wine and grapes are under siege.

First discovered in Pennsylvania in 2014, the invasive spotted lanternfly is expected to reemerge this spring, from egg sacs last season's adults laid before dying off in the winter. The bugs like to feed off trees, but will also threaten the crops we hold dear.

Bug-averse humans are in for a wild spring, as the lanternflies will be out in force when the cicada Brood X emerges from the ground. The brood's 17-year life cycle ends and restarts year after the bugs emerge from a bout of underground feeding that began in 2004.

But while the lanternflies and cicadas may be in some of the same spots, it's unlikely they'll interact, and the species will emerge at different times, a local entomologist tells NBC10.

When the cicadas emerge in May, they'll shed their skin, and then thousands of males will call out to potential mates. The insects will only be out for few a weeks to have a good time - maybe that's why they had a locally brewed beer dedicated to them in 2014. 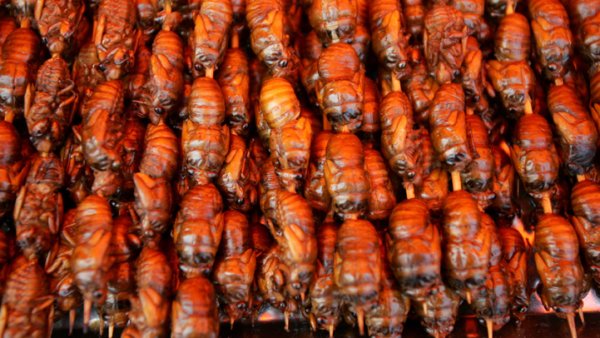 Cicadas: “The Shrimp of the Land” 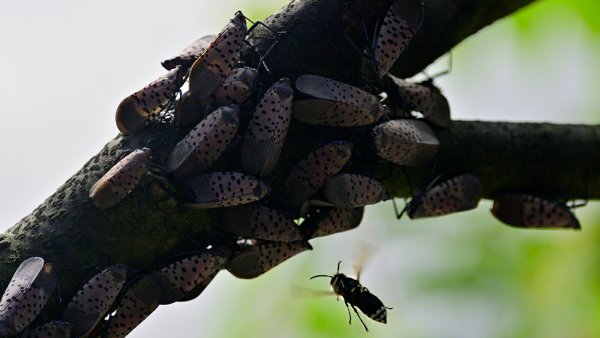 Spotted Lanternfly Explained: Why This Invasive Pest Is Wreaking Havoc and the Unusual Way Experts Are Trying to Stop It

"Within a week or two at the most, those adults are done, they’re dead and gone, and we won’t see them again for 17 years," said Jon Gelhaus, a Drexel entomologist at the Academy of Natural Sciences.

Lanternflies are not as polite. With their impacts on grapes and other fruits - and grossing out customers at this Philadelphia Chipotle last year - lanternflies are a major threat to a good time. (Though lanternflies were depicted in a locally brewed beer, too.)

The cicadas' noise might bother some, but the bugs are harmless to humans and are far less destructive than lanternflies. Female cicadas laying eggs will cause damage to small tree twigs, potentially killing those branches or branch tips.

The lanternflies will feed often, leaving behind a black residue called "honeydew" that attracts bees, promotes mold growth and can disrupt photosynthesis, the process by which plants take in sunlight and create energy.

Luckily, there is still time to destroy lanternfly egg sacs. They might be on wood pallets, a dumpster, or other surfaces outdoors. Look for a dark-colored mass with several bumps on it. The U.S. Department of Agriculture suggests scraping the egg mass into a container with rubbing alcohol or hand sanitizer to destroy the eggs.

Also helping in the fight to destroy the eggs is Lucky, a German Shepherd dog the University of Pennsylvania's veterinary school trained to sniff out the lanternflies' eggs so they can be eradicated.

Unlike the Brood X cicadas not returning until 2038, lanternflies "will have an impact this year, and next year, and the year after until hopefully we can find some controls, maybe natural controls that can bring the population down," Gelhaus said.

To those who might feel overwhelmed by so many bugs, Gelhaus had some words of wisdom: focus on the rarity of what's happening with this natural phenomenon.

"Look on it as, this is a really special thing. ...If you’ve got kids, use it for them to learn something about natural history and think about why these insects have this kind of unusual life cycle."

Cicadas emerging: what to expect

Periodical cicadas are black and orange, so trees in some areas will look like Halloween in May. Also, the brood is not going to be everywhere - Gelhaus said there have been no recorded sightings of the bugs within the Philadelphia city limits, though they could be in Fairmount Park or the John Heinz National Wildlife Refuge. If you find cicadas there, researchers will want to know - you could post your findings with a photo and location tag on the INaturalist app.

Gelhaus expects to drive to denser wooded areas to observe the periodical cicadas, and other enthusiasts will too. (Yes, there are enthusiasts. Gelhaus seen his fair share of cicada tattoos.)

"But they'll chorus all together, so you get these waves of sound...it may be interesting on Zoom calls, things like that, if they're all around you," Gelhaus said.