A man has been charged with attempted murder and aggravated assault after authorities allege he drove into New Jersey in a police vehicle stolen in Pennsylvania and then exchanged gunfire with police, wounding one officer.

The Camden County prosecutor's office said Friday that 41-year-old Arthur Disanto Jr., who was critically wounded, is charged with two counts of attempted murder and six counts of aggravated assault as well as resisting arrest, weapons offenses and receiving stolen property. It’s not clear whether he has an attorney to speak on his behalf.

Disanto, wanted in the July 3 shooting of a woman in the Philadelphia suburb of Media, was on a motorcycle when Pennsylvania troopers tried to stop him Monday night in Marple Township. A plainclothes officer in an unmarked police sport utility vehicle later spotted him in Folcroft, but officials said he reached for a gun and then got in the SUV and drove off as the officer retreated behind the vehicle. The officer shot out windows of the fleeing SUV.

A man wanted for attempted homicide out of Delaware County, Pennsylvania, was arrested after stealing a SWAT vehicle, driving into New Jersey and having a shootout with police. NBC10's Miguel Martinez-Valle reports. 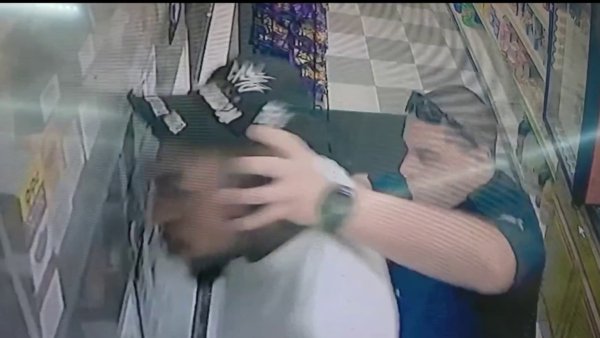 The vehicle was tracked to Deptford Township, New Jersey, but the suspect had already exited, taking SWAT gear, authorities said. A drone spotted him on a shed roof, and he ran and traded gunfire with officers shortly before midnight in front of a Washington Township home, authorities said.

Authorities said a Monroe Township police officer wounded during the shootout was treated and released after sustaining non-life-threatening injuries. The officer wasn’t identified.

Disanto was also struck three times by gunfire and remains in critical but stable condition at Cooper Medical Center, the Camden County prosecutor’s office said. The office said it was named independent prosecutor by the state attorney general’s office to probe “the use of force matter and the potential underlying criminal charges.”

In addition, state police plan charges stemming from the pursuit, and Disanto faces charges in Pennsylvania stemming from the carjacking of the police vehicle and the alleged attempted homicide in last month’s shooting, authorities have said.