Philadelphia police have identified and charged the man suspected of raping a woman inside the Center City Macy's store over the weekend.

Police believe Uqdah is that man seen on the footage, and arrested him at his North 53rd Street address Wednesday morning.

At that location, “we also recovered all of the clothing, detailed clothing he was wearing during the assault as well as all of the skewers he had in his possession,” Burgmann said.

“He seemed pretty brazen...he went into that store at 11:11...within 3 minutes he was in that bathroom," Burgmann said. "He went nowhere else but that bathroom.”

Burgmann said there are no other sex assault cases Uqdah is linked to right now, and no other reports about him, but police will keep looking.

"That’s why want his photo out there," Burgmann said. "If anyone was victimized by him, contact us here, we can follow up. We are looking at that possibility and we’re looking all over the city for anything that matches him.” 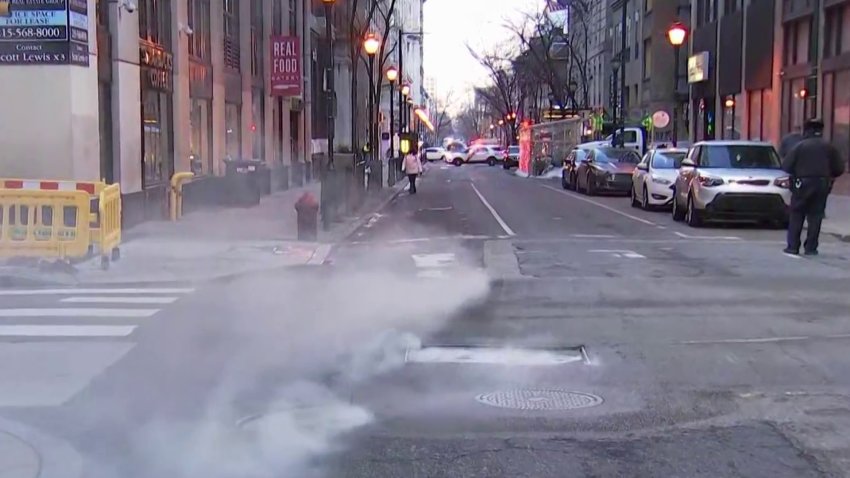 The 55-year-old woman was shopping with her husband when she went to the third floor of the store to use the bathroom. That's where she was attacked and sexually assaulted by a man who was holding 12-inch cooking skewers in his hand, according to investigators. The man then fled the scene.

"When she went inside the bathroom he was in the stall," Burgmann said earlier this week. "He jumped over the stall into her stall."

Officials said no one heard anything until the woman came out of the bathroom and called police.

Surveillance footage showed the suspect, who police believe had waited inside the bathroom for up to 20 minutes before the attack, left the store on foot and boarded a SEPTA Market Frankford Line train at 13th and Market streets around 11:45 a.m. He then exited the SEPTA station at 52nd and Market streets at 11:54 a.m. Sunday.

On Tuesday, Philadelphia police released additional surveillance video and photos of the suspect entering and leaving a store in the area of 52nd Street and Girard Avenue after the assault.

A spokesperson for the Center City Macy's told NBC10 they are "shocked" and "saddened" by the incident and are increasing their security measures as a result.

As police continue to search for the man accused of raping a woman inside the bathroom of the Center City Macy's store, they released new surveillance video of the suspect inside another store after the assault.

"In response to this assault, we have added visual security presence outside of the restroom area and are considering additional security measures that can be implemented over the long term. Additionally, visible day porter housekeeping coverage for both the men’s and women’s restroom has been added as well as a review and closure of back of house areas restricted to the public."