Pennsylvanians 16 and Older Eligible for COVID-19 Vaccine in April

Pennsylvania health officials on Wednesday revealed that everyone in the state who is 16 or older will be eligible to get a coronavirus vaccine toward the end of April.

The announcement by Gov. Tom Wolf's administration includes a phased rollout that will see people in the state’s 1B and 1C groups be eligible toward the beginning of the month, while people 16 years old or older will be able to access a vaccine starting April 19.

Those in the state’s 1B group will be eligible for their vaccine starting April 5. However, a subsection of people in the 1B group – specifically law enforcement workers, firefighters, grocery store employees and food and agriculture workers – will be able to start making appointments immediately, Acting Pennsylvania Health Secretary Alison Beam said. Meanwhile, those in the 1C group will be eligible starting April 12.

“Our ultimate goal has always been to get shots into people’s arms efficiently, effectively and equitably. We believe this plan will bring us one step closer to that goal,” Beam said.

In Philadelphia, though, Health Commissioner Dr. Thomas Farley has repeatedly said that it will likely take until May 1 for anyone over 16 years old to be inoculated in the densely populated county, a stance that Philadelphia Department of Public Health spokesman Jim Garrow repeated Wednesday. 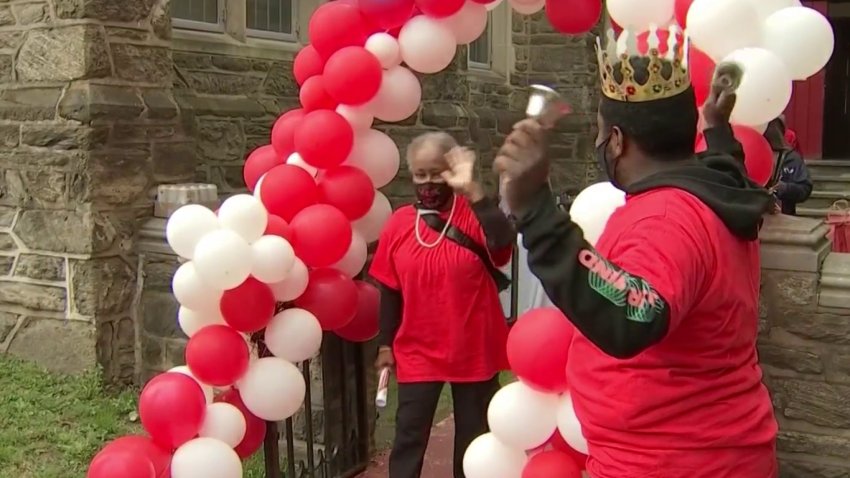 The new accelerated vaccine timeline from the state – which precedes President Joe Biden’s goal of making shots available for 90% of adults by nearly two weeks – comes after a recent push to more quickly inculcate people, following complaints about a slow rollout.

Note: The totals for one dose may include people who are receiving the first dose of two or the single-dose Johnson and Johnson vaccine. Source: All state-level totals for doses administered are from the Centers for Disease Control and Prevention. Otherwise, for Pennsylvania: County-level data is from the Pennsylvania Department of Health except for Philadelphia county, which is from the city. New Jersey: data is from the New Jersey Department of Health. Delaware: County-level data is currently unavailable.
Amy O'Kruk/NBC

In recent weeks, Pennsylvania officials have moved to mandate that health care providers make appointments for long-waiting residents aged 65 and older. The state has also moved to identify specific providers who have proven effective at administering shots and getting them a steady supply of doses, which Beam said has helped to accelerate distribution.

The federal government’s increase in supply has also helped, she said, which has allowed the state to scrap a contentious plan that would have seen regional vaccination sites shared by southeastern counties.

The state will now be able to distribute vaccine doses directly to those counties to use as they see fit, which was what leaders there have been calling for for weeks.

Beam said Pennsylvania is now vaccinating an average of 83,000 people a day.

Still, the state is not out of the woods yet, with COVID-19 variants contributing to a recent increase of infections.

“Our case counts are not at a plateau anymore. We are seeing case counts rise, which will naturally be followed, likely, by an increase in hospitalizations and possibly even, tragically, deaths,” Beam said.

She said the state, like the rest of the country, is having trouble tracking variants, and that more variants are likely present in Pennsylvania than are currently being reported.