When Starbucks barista Lenin Gutierrez denied service to customer Amber Lynn Gilles at a Clairemont location earlier this month, she posted about the incident on Facebook

An online fundraiser collecting "tips" for a San Diego Starbucks barista who denied service to a customer after she refused to wear a face mask has amassed over $100,000 in donations from supporters who believe the barista did the right thing.

A message posted to the GoFundMe page on behalf of Gutierrez thanked supporters and noted that the donations would “change the trajectory of Lenin’s future for the better.”

According to the fundraising page, Gutierrez will receive 100% of the donations and plans to use the money to pursue his dreams of becoming a dancer.

“He also wants to donate to some organizations in the San Diego community,” the post added.

Gutierrez is set to meet with a financial advisor this week to help him manage and invest his funds.

On June 22, San Diego resident Amber Lynn Gilles, 35, posted a photo of Gutierrez on her Facebook page, shaming him for denying her service.

The social media post read: “Meet Lenen from Starbucks who refused to serve me cause I’m not wearing a mask. Next time I will wait for cops and bring a medical exemption.”

The post went viral and Gilles has faced a lot of backlash.

NBC 7 spoke with her last week, and she said she had even received death threats from total strangers.

A Clairemont woman who was denied service at a Starbucks for refusing to wear a mask says she’s received death threats after publicly shaming a barista on social media, reports NBC 7's Artie Ojeda.

Face coverings are mandatory inside businesses in San Diego County. Public Health officials said businesses have the right to refuse service to anyone not complying with the public health order. Medical conditions that would be inhibited by face masks are one of the few exemptions to wearing face masks.

Gilles has three children, considers herself an anti-vaxxer, and said face masks are ineffective, a claim that health experts dispute.

Gilles also claimed she bought coffee two days earlier at the same Starbucks location in Clairemont without wearing a mask.

NBC 7 hasn’t spoken with Gutierrez but the barista did post a video on his Facebook page explaining his side of the story.

In the video, he said he asked Gilles if she had a face mask, to which she responded that she didn’t need one.

“Before I could say anything, she flipped me off and said, ‘I don’t need one,’ and she started cursing up a storm,” Gutierrez explained in his video. “She started calling people sheep and she left and within a few minutes came back and she asked for my name and took a photo.”

Gilles told NBC 7 last week that she wants some of the money collected through Gutierrez’s GoFundMe page. She is threatening to sue the creator of the account for defamation and slander.

The fundraiser page is titled: “Tips for Lenin Standing Up to a San Diego Karen.”

Many of the comments left by people who have donated on the page praise Gutierrez for following the rules and “doing the right thing.” 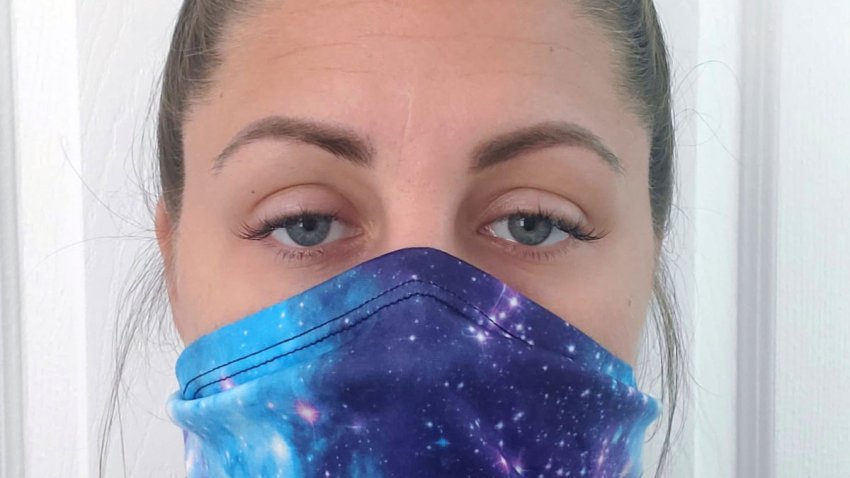 While physical distancing is considered the most effective way to slow the virus' spread, research has underscored the protection that wearing face coverings also offers.

An analysis of 172 studies across the world found that using a mask or respirator might reduce the risk of getting infected to 3.1%, compared to 17.4% without a face covering. N95 respirators appear to offer the best protection from infection but the Centers for Disease Control and Prevention has stressed the use of cloth coverings to protect others and preserve N95s for health care workers on the front lines.

"That's why I've suggested that the president occasionally wear a mask, even though in most cases, it's not necessary for him to do so," Alexander said. "The president has plenty of admirers. They would follow his lead."