The three, ranging from second grade to eighth, miss their friends and getting to sit in a classroom. Being stuck in the house together is wearing on their nerves.

And now that school is virtual for at least the first six weeks of the year, the Johannsen kids can add internet access to their list of stressors. 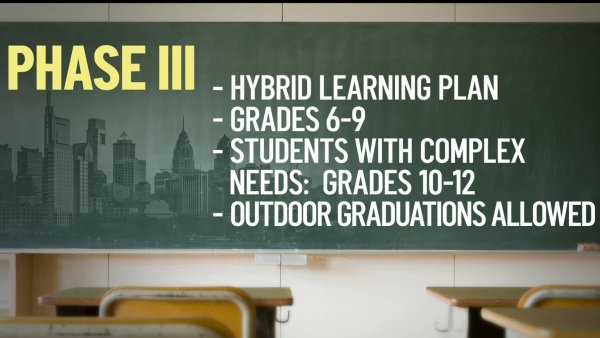 Back to the Classroom for More Public School Students in Philadelphia

schooling in a pandemic Apr 30

From their home in Clayton, the family’s satellite internet has already booted the kids out of online learning sessions. When Johannsen is working from home, four people online at once is too much for their server.

“We’ve had many tears and meltdowns over the last 24 hours with virtual school,” Johannsen said.

This week, thousands of Delaware students started the year learning through a computer, as most districts opted for a virtual start to the school year. Over the coming weeks, those districts hope to solidify the logistics of how to safely re-enter schools, reports the Delaware News Journal.

Across the state, first days were filled with tech troubleshooting, figuring out new learning platforms and where to find assignments, and simply meeting teachers and virtual classmates.

But while day one was focused primarily on introductions and logistics rather than academics, working parents still say that juggling work and making sure their kids stay on track is going to be a heavy lift over the next six weeks.

Some have little faith their schools will make the transition to hybrid learning as the year goes on.

“I just don’t know where the end is,” Johannsen said. “Do we get to go back to school this year at all before next September in some full-time capacity? Or are we like, OK, the whole 2020-2021 school year is virtual or hybrid to some extent?”

Johannsen’s first day was spent helping her children navigate technology, like how to log into platforms like Google Classroom or Schoology. How to create Google Slides. Or what to do when the internet cut out.

All of which took time away from her own work. Johannsen said she was only able to get work done during the kids’ lunch break, and when they logged off in the afternoon.

Her younger children spent only about an hour on Zoom, and Johannsen is worried that Smyrna School District’s emphasis on independent learning time will be a detriment to their education.

“I don’t know how him teaching himself, especially with an IEP is going to help him,” Johannsen said of her middle son. “The younger ones, I just think that they’re not going to learn. The burden is going to fall back on the parents to be the teacher.”

Her eighth grade daughter already feels like online learning isn’t as worthwhile as time in the classroom. And Johannsen is worried she’ll eventually have to get tutoring for her younger children.

Engagement and whether kids will actually learn from online education has been a key concern for teachers and administrators.

In the spring, it wasn’t unheard of for students to feel mentally checked out. Their daily classes suddenly turned into sporadic Zoom sessions. Little new material was being taught, and grades and attendance requirements came to a halt.

In some cases, teachers had a hard time tracking down students, a fear that remains.

For teachers, the summer was spent preparing to teach through a medium most had never worked with.

And most students have never learned entirely through a computer. And unlike teachers, they haven’t had a summer of training to prepare for the months ahead.

Some students seem to be faring better than others — like Heather Cruz’s daughter, a third-grader at Providence Creek Academy. Cruz said her daughter is self-sufficient enough to get through Zoom sessions on her own, and the school’s new online learning platform is easy enough for her to navigate when Cruz isn’t able to work from home.

“When you have a kid, they’re supposed to go to school five days a week. That’s how the world works,” Cruz said. “None of us expected to be faced with this as a parent. It’s not ideal. But it can work.”

Virtual learning is a huge shift in mindset for all those involved. Some parents are worried that no matter how much prep teachers have put in this summer, students who struggle with concentrating and paying attention are going to be left behind.

“There’s only so much you can do with a computer screen,” said parent Nicole Donahue. “Already, I feel like there was a setback from missing out on the last marking period in the spring. I feel like they’re having to catch up now.”

For online learning to work, teachers, parents and students all have to be involved and engaged, said Rachel Karchmer-Klein, an associate professor in the School of Education at the University of Delaware.

Students can’t be “passive consumers of learning,” she said. And especially with younger learners, some level of family involvement at home helps the day go by smoother.

For working parents, playing that active role during the day is easier said than done.

“I think (teachers) just assume the kids are home with the parents,” said Eola Harter.

Her first-grade son would normally be in class at Castle Hills Elementary School in Colonial School District. Because of work, Harter had to make last-minute accommodations for him to do virtual school at the YMCA, after Colonial decided to go fully virtual for the start of the year.

The YMCA gives Harter and other working parents a supervised place for their kids to learn during the day. But she isn’t sure how much help they’re able to offer if he has technology issues, or trouble paying attention. She said she worries about it all day.

“It takes away from my work, because I’m always wondering, is he paying attention? Am I going to get a phone call one day saying he’s not doing his work?” Harter said.

Her son’s report after day one? Extreme boredom.

“Most kids that age are not going to sit all day,” Harter said. “I don’t see how they expect kids, especially the little ones, to learn like that. How many of them are sitting there actually paying attention?”