Health Secretary Dr. Rachel Levine says that its up to every Pennsylvanian to stop the spread of coronavirus and that as of now there are no plans for a large-scale shutdown in the state

The state health secretary, Dr. Rachel Levine, teased “targeted efforts to control the spread of COVID-19 in Pennsylvania" ahead of Tuesday afternoon's announcement.

Levine didn't announce any widespread closure orders Tuesday, but she did release new orders. Pennsylvania is strengthening its mask mandate and will require out-of-state travelers to test negative for the coronavirus before arrival.

Pennsylvania already has a statewide mask mandate, limits on indoor and outdoor gatherings and occupancy restrictions at bars and restaurants. On Tuesday, Levine expanded on the masking effort to cover almost every indoor public situation.

The state's "critical" mask order is being extended to cover all indoor situations --even when people are 6 feet apart -- when people not related to each other are near each other.

The state said the order applies to every indoor facility, including private homes, but Levine acknowledged that officials are relying on voluntary compliance rather than on enforcement.

“In the end, people will have the consequences of their actions as well as their families and their communities, and if they do not wear masks, if they do not social distance, then those communities are going to see even more spread of COVID-19," she said.

A separate order mandates that people who are traveling to Pennsylvania from another state, as well as Pennsylvania residents who are returning from out of state, must test negative for the virus within 72 hours prior to arrival. The order, which goes into effect Friday, does not apply to people traveling back and forth for work or medical treatment. People who refuse to be tested will be required to quarantine for 14 days, Levine said.

Again, the state has no plans to enforce that measure, but is asking for voluntary compliance.

"What we ask everyone is to stand united to stop the spread in Pennsylvania," Levine said.

Levine said that people shouldn't travel unless necessary and urged people to avoid Thanksgiving-related travel. She suggested meeting with loved ones virtually instead.

The departments of Health and Education also advised colleges and universities on Tuesday to have a testing plan for students returning to campus after the holidays. 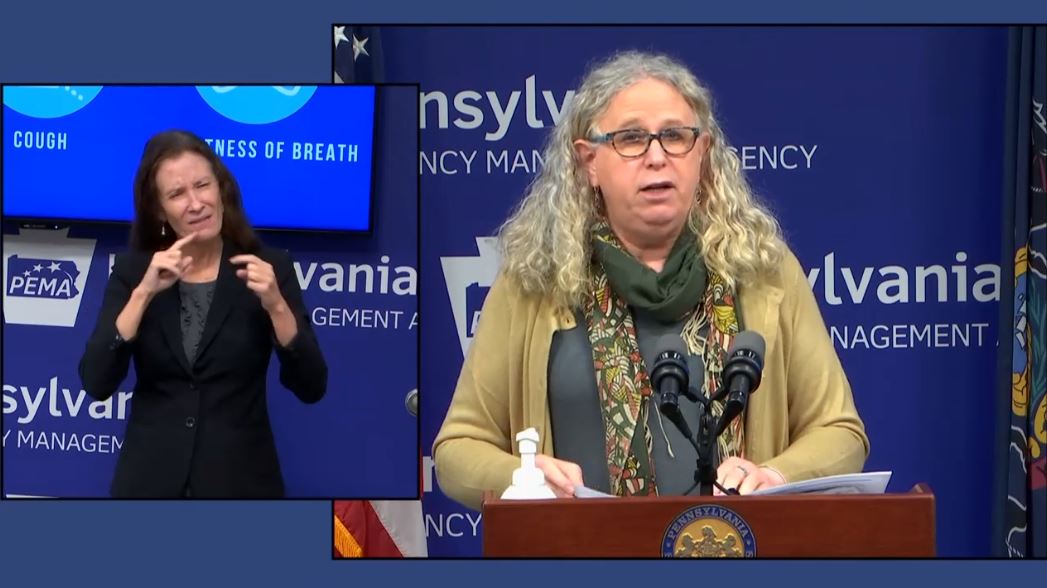 Like the rest of the nation, Pennsylvania has seen coronavirus infections explode in recent weeks. Levine noted that the White House alerted states that current mitigation efforts to slow the spread of COVID-19 are inadequate.

The state has been reporting more than 5,000 new infections per day, up more than 115% in just two weeks, and hospitalizations and the percentage of tests coming back positive are up sharply. Deaths are on the rise, as well.

On Tuesday, 5,900 new COVID-19 cases were reported in Pennsylvania, a new daily record in cases. There were at least 2,575 people hospitalized with 558 of those people in intensive care units. There were 30 new deaths reported to bring the statewide total of confirmed deaths to at least 9,355 deaths.

Modeling shows the Pennsylvania's hospitals will run out of intensive care beds by December if actions aren't taken. Levine said the state is working with hospitals to discuss procedures that could be put on hold to allow for more bed capacity.

More testing is being done in Pennsylvania as cases hit new highs, but more people are also testing positive. Statewide the positivity rate for the week of Nov. 6 – Nov. 12 was 9.6%.

Governors and mayors around the country have been tightening restrictions in response to the worsening pandemic. On Monday, Philadelphia said it would ban indoor gatherings and indoor dining and shutter casinos, gyms, museums and libraries.

Democratic Gov. Tom Wolf imposed a state-at-home order and shuttered businesses deemed “non-life-sustaining” early in the pandemic, but Wolf and Levine have consistently said they have no intention of implementing another broad-based shutdown.

Levine of Tuesday said there is no plan at this point to go back to the red, yellow, green system used during the first wave of the pandemic.