The latest on the coronavirus pandemic in the US and elsewhere

The United States topped 12 million cases of COVID-19 on Saturday, as the third wave's uncontrolled spread prompted the Centers for Disease Control and Prevention to urge Americans not to travel for Thanksgiving.

More than 40 states plus Washington D.C., Puerto Rico, the U.S. Virgin Islands, and Guam are experiencing a percentage increase in cases from over the past 14 days. Of those, a dozen states are seeing a spike in new cases. 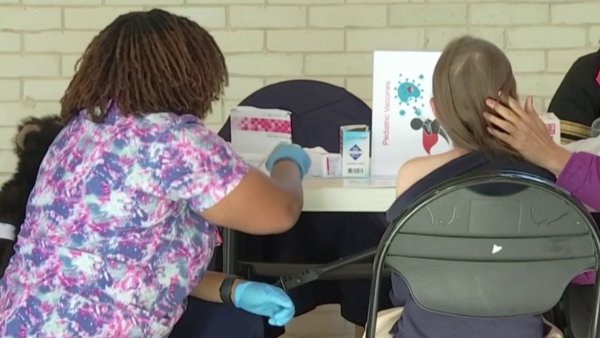 schooling in a pandemic 3 hours ago

Philly Doctors, FEMA Team Up to Get COVID Vaccines to Philly Students

First US Immunizations Could Arrive on Dec. 12

The head of the U.S. effort to produce a coronavirus vaccine says the first immunizations could happen on Dec. 12.

A Food and Drug Administration advisory committee is set to meet Dec. 10 to discuss Pfizer Inc.’s request for an emergency use authorization for its developing COVID-19 vaccine.

Pfizer and its German partner BioNTech recently announced that the vaccine appears 95% effective at preventing mild to severe COVID-19 disease in a large, ongoing study.

Slaoui told CNN he expects vaccinations would begin on the second day after approval, Dec. 12.

The U.S. Food and Drug Administration green-lit emergency authorization for an experimental drug cocktail shown to be effective in preventing severe illness in people infected with the coronavirus, NBC News reports.

The drug, developed by Regeneron, was approved to treat mild to moderate COVID-19 cases for both adults and children over the age of 12 who are at risk of developing severe symptoms. This includes people 65 years of age and older and those with chronic medical conditions.

In a clinical trial of people with the coronavirus, patients who received a cocktail containing the monoclonal antibodies casirivimab and imdevimab showed reduced instances of hospitalization and emergency room visits. Monoclonal antibodies are made in a lab to mimic the body's natural antibodies that fight off harmful pathogens, such as viruses.

Casirivimab and imdevimab must be administered intravenously and are not approved for patients who require oxygen therapy as a result of COVID-19.

The FDA said it will continue to evaluate the safety and effectiveness of the treatment, it said in a statement.

Loeffler took a rapid COVID-19 test Friday evening that came back positive, a day after she campaigned with Vice President Mike Pence and U.S. Sen. David Perdue, who also faces a Jan. 5 runoff.

“Out of an abundance of caution, she will continue to self-isolate and be retested again to hopefully receive consecutive negative test results. We will share those results as they are made available. She will continue to confer with medical experts,” Loeffler campaign spokesperson Stephen Lawson said in a statement.

Loeffler's campaign has said she didn't have COVID-19 symptoms and is following CDC guidelines both to isolate and inform people with whom she had direct contact.

Perdue said before Loeffler's negative test was announced Sunday that he would remain at home as he awaited Loeffler's results. Pence staffers have not indicated whether he has been tested for COVID-19 since campaigning with Loeffler or whether he plans to isolate.

Loeffler has held several rallies in recent weeks with crowds packed into close quarters and many audience members not wearing masks.

Loeffler is facing Democrat Raphael Warnock in a Jan. 5 runoff election — one of two races that will determine which party has control of the Senate. The other race will feature Perdue and Democrat Jon Ossoff.

If the Republican wins either race, then the party will keep control of the U.S. Senate.

British Prime Minister Boris Johnson plans to end an England-wide lockdown as scheduled on Dec. 2 and will announce a return to regional restrictions as statistics show that coronavirus infections have stabilized.

Johnson’s office also confirmed plans to begin a nationwide COVID-19 vaccination program next month, assuming regulators approve a vaccine against the virus. The government also will increase mass testing in an effort to suppress the virus until vaccines can be rolled out.

Johnson’s office said late Saturday that the government plans to return to using a three-tiered system of localized restrictions in England, with areas facing different lockdown measures based on the severity of their outbreaks. More communities are expected to be placed in the two highest virus alert categories, it said.

The government put England under a four-week lockdown that started Nov. 5. The Cabinet is to discuss the plans Sunday, and the prime minister aims to give Parliament the details on Monday, according to the statement.

Johnson announced the lockdown in England on Oct. 31 after public health officials warned that an exponential rise in new daily coronavirus infections was threatening to overwhelm the National Health Service as the winter flu season approached. The lockdown closed non-essential business like many shops, gyms, bars, restaurants — although takeout was permitted. It also banned most social gatherings but schools remain open.

New known cases of COVID-19 have started to drop across the U.K., with the number of positive tests during the past seven days falling 13.8% from the week before. Some 2,861 COVID-related deaths were reported over the last 7-day period, 17 fewer than a week earlier. Still, the infection rate remains high, at 244 cases for every 100,000 people.

As the coronavirus surges to record levels in Nevada, the governor has implored residents to stay home. But Democrat Steve Sisolak has also encouraged out-of-state visitors, the lifeblood of Nevada's limping economy, to come to his state and spend money in Las Vegas.

The pandemic has put officials in this tourism-dependent place in a double-bind: trying to protect the economy while keeping people safe.

With the state seeing a record number of new cases, Sisolak said he's on the brink of imposing new restrictions, but he's walking a tightrope.

“I don’t want to shut down the entire economy if I can at all avoid it,” Sisolak told reporters on a phone call Wednesday. “We can keep everybody safe and accomplish both ends.”

Nevada's tourism and hospitality industry has an estimated $67.6 billion economic impact, employing more workers and bringing in more state tax revenue than any other sector. Right now, it's hurting and Nevada is facing a nearly 13% unemployment rate — the second highest in the U.S. behind Hawaii.

While the governor has urged Nevadans to try to get their groceries delivered, forgo in-person dining and stay home, he’s said he welcomes out-of-state tourists to Nevada. And though he implored residents to consider curbside pick-up, he said tourists were welcome to patronize restaurants as long as they followed protocols, such as abiding by the statewide mask mandate.

The Nevada Hospital Association reports 80% of hospital beds in the state are occupied and said in a bulletin this week that “current strategies are not successfully minimizing the spread of serious disease.”