President Donald Trump says that he wants to reopen the country for business in weeks, not months, and claims without evidence that continued closures could result in more deaths than the coronavirus pandemic.

Health experts have made clear that unless Americans continue to dramatically limit social interaction — staying home from work and isolating themselves — the number of infections will overwhelm the health care system.

Meanwhile, U.S. infections continued to rise, hitting 55,225 cases and over 800 deaths. Worldwide, more than 425,000 people have been infected and almost 19,000 have died from the virus that first emerged in central China late last year. As cases in China ebbed, the dangers to Europe and the U.S. have grown exponentially.

Here's the latest developments in the coronavirus crisis in the U.S.:

US Could Become New Virus Epicenter, WHO Says

The United States could become the global epicenter of the coronavirus pandemic with cases growing quickly, the World Health Organization (WHO) said.

“We are now seeing a very large acceleration in cases in the U.S. So it does have that potential,” WHO spokeswoman Margaret Harris told reporters in Geneva on Tuesday.

The agreement came after days of often intense haggling and mounting pressure and still needed to be finalized in detailed legislative language.

Top White House aide Eric Ueland announced the agreement in a Capitol hallway shortly after midnight. "Ladies and gentlemen, we are done. We have a deal," Ueland said.

The unprecedented economic rescue package would give direct payments to most Americans, expand unemployment benefits and provide a $367 billion program for small businesses to keep making payroll while workers are forced to stay home.

Liberty University, located in Lynchburg, Virginia, is facing backlash after it welcomed students back to campus on Tuesday. The university decided to allow students to return after Spring Break last week despite growing concerns about the virus both from state and federal officials.

As many colleges nationwide began announcing campus closures this month, Liberty, which is among the nation's largest and most prominent evangelical institutions, initially planned to continue on-campus instruction. But last week, after Virginia Gov. Ralph Northam restricted gatherings of more than 100, Liberty said it would transition most classes online effective Monday.

Liberty said in a statement Monday that it was working hard to comply with all state restrictions while providing safe and reliable accommodations for students, including extra sanitizing measures and changes to on-campus dining.

Liberty spokesman Scott Lamb said about 1,100 students were back on campus by Tuesday morning. He said a former hotel the university owns is available as a quarantine site if needed and tents have been set up “preventatively” for any student on campus who might feel ill.

Lynchburg Mayor Treney Tweedy said in a statement that she thought the decision letting students return was "reckless."

There are nearly 300 confirmed cases in Virginia and at least nine deaths, according to the state health department. Gateley said Lynchburg doesn't have any confirmed cases.

The need for basic supplies, masks, gloves and gowns is reaching a desperate level for some doctors, nurses and technicians fighting the COVID-19 outbreak. "The allotment of personal protection equipment for one of our hospitals...is barely enough to cover one shift at that hospital, not even a full day's worth," says Michigan Gov. Gretchen Whitmer.

Los Angeles County health officials backtracked Tuesday on their announcement that a child died from coronavirus, saying it’s possible the death was caused by something else.

“Though early tests indicated a positive result for COVID-19, the case is complex and there may be an alternate explanation for this fatality" and the case will need evaluation by the U.S. Centers for Disease Control and Prevention, the statement said.

A 31-year-old from Mexico has become the first person in immigration detention in the U.S. to test positive for COVID-19.

U.S. Immigration and Customs Enforcement says the unidentified migrant was being held at Bergen County Jail in Hackensack, New Jersey, when he tested positive. The agency says the migrant is quarantined and is receiving care at an undisclosed location.

The agency says it is suspending the intake of new migrants at the jail.

ICE previously said a member of the medical staff at the Elizabeth Detention Center in New Jersey tested positive for the virus.

President Donald Trump and Attorney General William Barr both addressed the media on Tuesday during Monday’s Coronavirus Task Force press briefing. The president and the attorney general announced the signing of an executive order to help fight the hoarding of supplies essential needed to fight the spread of the coronavirus and to protect health care workers.

The U.S. is now more than a week into an unprecedented 15-day effort to encourage all Americans to drastically scale back their public activities.

On Monday, the U.S. saw its biggest jump yet in the death toll from the virus, with 609 American deaths attributed to COVID-19 since the outbreak began. As of Wednesday morning, the overall number of cases in the U.S. hit 55,225 coronavirus cases, including more than 800 deaths.

The states with the most cases are New York, California and Washington. 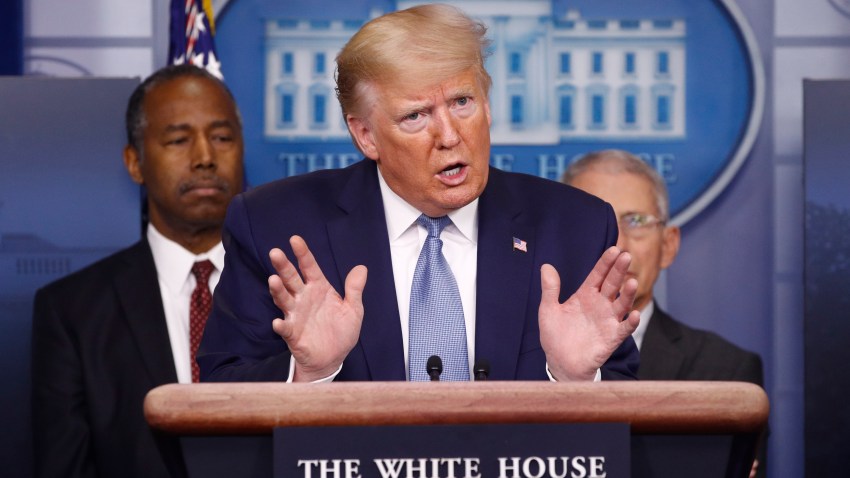 Trump Hoping to See US Economy Reopened by Easter Amid Virus 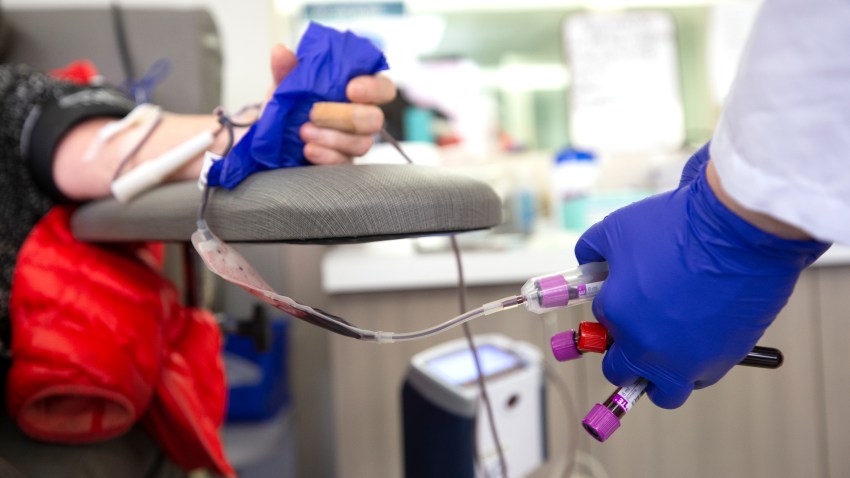 Ford Partners With 3M, GE to Make Masks and Respirators

Ford is working with 3M to make powered air-purifying respirators. It is teaming with GE Healthcare to expand production of a simplified version of GE Healthcare’s existing ventilator design to support patients with respiratory failure or difficulty breathing.

Ford said it will also assemble more than 100,000 plastic face shields per week at one of its manufacturing sites and will use its in-house 3D printing capability to make components for use in personal protective equipment. The company already is producing masks and will test them at Detroit-area hospitals.

Ford also is looking at repurposing vehicle parts for use in respirators for health care workers and first responders such as the small fans used to cool seats in the F-150 pickup truck.

The companies said they didn’t have a time frame for when the much-needed ventilators might be produced.

The Trump administration will formally use the Defense Production Act for the first time during the coronavirus pandemic on Tuesday to secure thousands of COVID-19 test kits, according to FEMA Administrator Peter Gaynor, CNBC reported.

Gaynor told CNN triggering the Korean War-era act, which allows the government to compel the private sector to manufacture needed medical supplies, will help the federal government acquire some 60,000 kits. He also said the White House planned on adding "DPA language" to its contract for 500 million masks.

Gov. Andrew Cuomo warned Tuesday the infection rate of coronavirus cases in New York is accelerating and the state could be two to three weeks away from a crisis that sees 40,000 people in intensive care.

Cuomo also criticized the federal response to the outbreak, saying the Federal Emergency Management Agency sent the state 400 ventilators when they need at least 30,000.

"You pick the 26,000 people who are going to die because you only sent 400 ventilators," Cuomo said in his daily briefing Tuesday.

The governor said the rate of new infections is doubling about every three days, standing at 25,665 as of Tuesday. The death toll in New York climbed to 183.

A surge of infections would swamp hospitals, which now have just 3,000 intensive care unit beds in the entire state. New York now estimates it will also need 140,000 hospital beds, up from previous projections of 110,000.

"The rate of increase continues unabated. We're not slowing it -- and it is accelerating on its own," Cuomo said. "We're not looking at a freight train. We're looking at a bullet train, because the numbers are going up that quickly."

New York Governor Andrew Cuomo discusses the lack of ventilators for people affected by the coronavirus in his state.

A U.S. Navy sailor has become the first person to test positive for the coronavirus at the U.S. base at Guantanamo Bay, Cuba.

The base says in a statement Tuesday the unidentified sailor is isolated at home at the naval station along the southeastern coast of Cuba. The base says health authorities are attempting to track anyone who had contact with the sailor.

Medical personnel have been screening anyone who arrives at the base and the Navy has imposed social-distancing rules.

The naval station has a population of about 6,000 people. That includes about 2,000 foreign laborers from Jamaica and the Philippines.

There are still 40 prisoners held at the Guantanamo detention center. Most base personnel have no contact with the men held there.

McConnell: 'We Are Very Close' on Stimulus Package

Top congressional and White House officials said they expected to reach a deal Tuesday on a measure to shore up businesses and send relief checks to ordinary Americans.

Treasury Secretary Steven Mnuchin returned to the Senate Tuesday for final negotiations on a nearly $2 trillion measure aimed at easing the economic damage inflicted by the coronavirus pandemic.

Opening the Senate on Tuesday, Majority Leader Mitch McConnell, R-Ky., said "we are very close" to reaching an agreement on the bill.

“Today we can make all of the Washington drama fade away," McConnell said. "If we act today, what Americans will remember and what history will record is that the senate did the right thing.”

The sense of optimism extended to House Speaker Nancy Pelosi, D-Calif., who told CNBC: "I think there is real optimism that we could get something done in the next few hours.”

The International Olympic Committee postponed the Olympics until 2021 on the recommendation of Japanese Prime Minister Shinzo Abe, adding the games to the long roster of sports events disrupted by the deadly outbreak.

The announcement was a nod to the reality that training and qualifying schedules have been ruptured beyond repair as the coronavirus spreads. Next up for the organizers is picking a date when it might be safe again to hold such a massive event. They'll also have to rearrange the 2021 global sports calendar.

The IOC says the games will still be called the 2020 Tokyo Olympics.

Athletes dedicate their lives for a chance to participate in the Olympic Games but the coronavirus has thrown a wrench into everyone's lives, including Olympic athletes. Team USA Karate athlete Sakura Kokumai shares her feelings after the International Olympic Committee made the decision to postpone the 2020 Tokyo Olympics until 2021.

Dr. Deborah Birx, the coordinator of the U.S. coronavirus response, said Tuesday that "there's a fine line" between balancing the economic needs of Americans and the fight against the pandemic.

In an interview on the "TODAY" show, Birx was asked to respond to President Donald Trump's assertion at a press conference Monday that the shutdown of many businesses around the country would last weeks, not months.

Birx said that “we have to be willing to adjust our plans as we see impact,” noting officials are evaluating data, including from Italy where after two weeks of a national lockdown the number of deaths has begun to decline.

Birx stressed that Americans should continue to heed guidelines on social distancing to guard against spread of the virus.

She said that “cases you are seeing right now” are “people who got exposed and sick two weeks ago.”