A cab driver and a grandmother recount the chaotic May 31 protests in West Philadelphia following the death of George Floyd, when SWAT teams descended on the neighborhood firing 'less than lethal' ammunition into crowded streets.

Nur Danial is at the grocery store when he gets a call from a friend saying the windows of his taxi have been smashed by protesters at 51st and Market Streets in West Philadelphia.

It's the second day of protests in Philadelphia following the death of George Floyd. Some people are breaking into stores along West Philadelphia’s business corridors, while others are igniting police cars.

As Danial rushes home, he gets a call that his taxi is now on fire. Once he arrives, Danial walks over to his partially charred taxi. Amid the chaos all around him, members of Philadelphia's SWAT teams roll in to disperse protesters. Danial opens his car door to get his license, insurance and other items, and he suddenly is struck in the head.

“And this time a cop shoots me in my forehead,” Danial says in an interview with NBC10. “I see blood is coming (out).”

The NBC10 Investigators’ camera was rolling as Danial realizes he’s been shot. He goes up to the police line asking why they shot him and points to his taxi. Eventually, strangers come to his aid, laying him on the grass next to the sidewalk and clean up his wound.

Thankfully for Danial, he was shot with a plastic pellet.

The cabbie was one of many residents, protestors and innocent bystanders who were struck by what police call “less lethal munition” -- plastic pellets filled with either paint or pepper spray, and beanbag rounds that are filled with tiny pellets inside -- during the first few days of protests and civil unrest in late May and early June.

The day after police fired pellets and beanbags at crowd of people in West Philadelphia, they used the same projectiles-- plus pepper spray and tear gas-- to get protesters off Interstate 676 in Center City.

As police started firing at the protestors, the demonstrators tried climbing up a steep hill and over a metal fence to escape. But many were trapped. Police continued to fire at them.

The next day, Police Commissioner Danielle Outlaw defended the police’s actions on the highway.

“The option of deploying tear gas was selected when it became evident at that time that other options were not effective,” she said at the time. 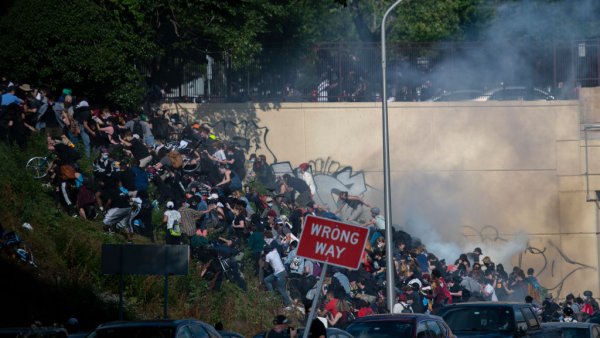 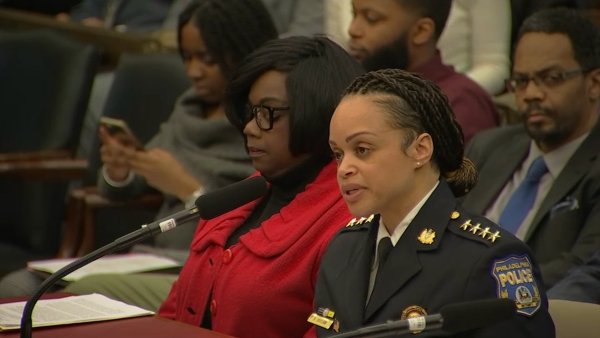 A few weeks later, after much criticism, Outlaw and Mayor Jim Kenney apologized for the use of force against the Center City protesters. West Philadelphia was not mentioned.

“I apologize sincerely to the peaceful protesters on that highway,” Kenney said.

In response to an inquiry from NBC10, Mayor Kenney said in a statement that he sees the protest on 676 different than the one at 52nd and Market Streets. He said in West Philadelphia, there was looting and destruction to businesses and police vehicles. But he did apologize to West Philadelphia residents.

"…I fully regret the use of tear gas and some of the other force by police in that situation as much as I do its use the following day on I-676,” his statement said. (You can read his full statement at the bottom of this story.)

The police department declined to comment for this story on the events of West Philadelphia. Since the controversial shootings against protesters and residents, the department has changed its use of less than lethal force policy. The city also hired an outside group to investigate the department’s response to the protests.

Several residents and protestors have already sued the city and police department over what they say was excessive force in the use of less lethal projectiles and tear gas.

Crystal McBee is one of the West Philadelphia residents suing the city. She said she was trying to get her granddaughter away from crowds at 52nd and Market Street when she was overcome by tear gas, and later struck by a pellet.

“I turned around and a bullet came and hit me right here in my head and it swelled up instantly,” she said.

McBee considers herself lucky that she didn’t lose an eye.

“They should have never brought the SWAT truck and tear gas into the neighborhood. And shooting bullets. To me, that’s dangerous,” she said.

Cynthia Bir, a biomedical engineer at Wayne State University, who is a consultant for the manufacturers of the plastic and rubber projectiles, described the ammunition as "less lethal, not non-lethal."

Bir said that projectiles such as bean bags and plastic pellets can cause serious injury and even death. The pellets and bean bag rounds Philadelphia officers used during the protests are supposed to be aimed directly at a person, not into crowds, she said. They are also meant to be shot at center mass or the limbs.

“What we were seeing across the U.S., there were a lot of head injuries. And these rounds are specifically … designed not to be shot at the head,” she said.

Danial, the taxi driver who was struck while trying to recover his vehicle's paperwork, said he still has ringing in his ear and frequent headaches. Two months later, the mark where the pellet struck him is still evident.

“A lot of the pain is sleeping time, nighttime, day time, all the time is this pain,” he said.

Danial has also hired a lawyer. He’s had to pay out of pocket for much of the repairs to his taxi and because of his headaches, he still doesn't feel comfortable driving people.

But he says he is grateful that it was a plastic pellet and not a real bullet.

"I have previously made clear that I am highly concerned about what transpired on 52nd Street. At the time, I stopped short of a formal apology in order to take time and more fully examine the circumstances that led to the decision. I chose instead to wait for the assessment of an independent after action review.

Still, I fully regret the use of tear gas and some of the other force by police in that situation as much as I do its use the following day on I-676.  While I understand the pressure that our officers were under and the need for swift action to address dangerous circumstances. Those tactics should have been used by police only when absolutely necessary in violent situations, and if— and only if—lesser methods did not stop the violent behavior. The events of that day remain under investigation, but I reiterate that any officer who violated PPD policy on 52nd Street will be held accountable.

In short, police were there to protect the neighborhood during a chaotic incident, but instead, peaceful members of that community felt further besieged and unsafe. I apologize to all residents and business owners on or near the 52nd Street corridor for what they experienced.

I vow to all of those who live in that community that the police reforms I announced several weeks ago will move expeditiously. I have three-and-a-half years left in office, and I am resolute that I will use that time to bring about real change and restore trust between the Philadelphia Police Department and our communities. My apology to West Philadelphians includes an apology for my own actions and for my delay in offering a substantive comment on what occurred that day. Our communities deserve better. "