The baby is the eighth in line to the British throne

The second baby for the Duke and Duchess of Sussex is officially here: Meghan gave birth to a healthy girl on Friday.

A spokesperson for Prince Harry and Meghan said Sunday the couple welcomed their child Lilibet “Lili” Diana Mountbatten-Windsor at 11:40 a.m. Their daughter weighed in at 7 lbs, 11 oz.

She was born "in the trusted care of the doctors and staff" at Santa Barbara Cottage Hospital in Santa Barbara, California.

Her first name, Lilibet, is a nod to Her Majesty The Queen's nickname. Her middle name is in honor of her grandmother and Harry's mother. The baby is the eighth in line to the British throne.

Meghan Markle and Prince Harry are giving us another look at Archie! The Duke and Duchess of Sussex released a new picture of their son to celebrate his second birthday! In the sepia-toned photo Archie’s back is to the camera as he holds a large bouquet of balloons in his right hand. We can’t see little Archie’s face, but we can see that he is already sporting an impressive mop of hair, looking more like his dad every day! The new picture comes hours after the royal couple announced that they are launching a Covid-19 vaccine fundraiser in honor of Archie’s special day.

The couple issued a statement along with the announcement on Sunday, writing, “She is more than we could have ever imagined, and we remain grateful for the love and prayers we’ve felt from across the globe. Thank you for your continued kindness and support during this very special time for our family.”

No photos of the newborn or the Sussexes accompanied the announcement.

The royal family congratulated the couple in posts online, as did the accounts of Prince William and Kate Middleton and Prince Charles and Camilla Parker Bowles.

"We are all delighted by the happy news of the arrival of baby Lili. Congratulations to Harry, Meghan and Archie," the Duke and Duchess of Cambridge wrote.

Harry and American actor Meghan Markle married at Windsor Castle in May 2018. Their son Archie Harrison Mountbatten-Windsor was born a year later.

In early 2020, Meghan and Harry announced they were quitting royal duties and moving to North America, citing what they said were the unbearable intrusions and racist attitudes of the British media. They live in Montecito, a posh area near Santa Barbara, California.

Meghan Markle can’t wait to be a mom of two! The pregnant duchess delivered a passionate video message during Saturday’s “Vax Live” concert broadcast. She and husband Prince Harry co-chaired the event and Meghan urged viewers to get vaccinated and doo their part to help bring the COVID-19 pandemic to an end. The 39-year-old, who is expecting her and Harry’s second child this summer, also touched upon how having a daughter on the way has shaped their perspective on the pandemic’s toll, especially considering its profound impact on women across the globe.

The birth comes after the Harry and Meghan’s explosive TV interview with Oprah Winfrey in March. The couple described painful discussions about the color of their first child’s skin, losing royal protection and the intense pressures that led her to contemplate suicide.

Buckingham Palace said the allegations of racism made by the couple were “concerning” and would be addressed privately.

Winfrey and Harry on mental illness have recently collaborated on the Apple TV+ mental health series “The Me You Can't See.”

Last year, Meghan revealed that she had a miscarriage in July 2020, giving a personal account of the traumatic experience in hope of helping others.

The royal family is allegedly unhappy that Prince Harry and Meghan Markle are speaking out about politics. Following backlash from across the pond, Montecito Journal columnist and royal expert Richard Mineards weighed in on the couple's joint TV appearance in the "TIME100" special to encourage American citizens to vote in the upcoming U.S. election.

Months before the miscarriage, Harry said the royal family cut him off financially at the start of 2020 after announcing plans to step back from his roles. But he was able to afford security for his family because of the money his mother, Princess Diana, left behind.

More on Harry and Meghan 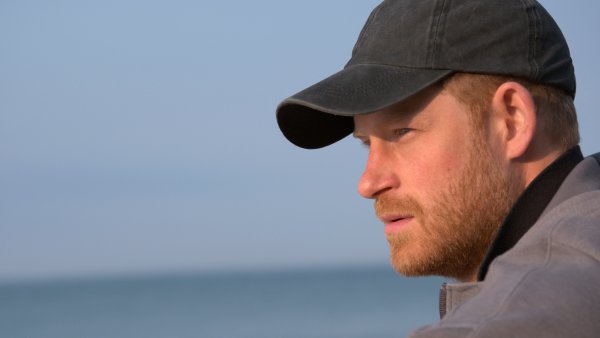 Prince Harry Tells Oprah That He Turned to Alcohol, Drugs to Cope With Diana's Death

Despite leaving royal duties, Harry's place in the order of succession to the throne remains.

Lilibet's birth moves Prince Andrew, who was born second in line in 1960, down to ninth place.