Gerrymandering and Redistricting in Pennsylvania, Explained

The process of drawing up new congressional and state legislative districts, called redistricting, happens once a decade. It's supposed to split the state up into equal pieces of voters, but often becomes a contentious fight among politicians trying to protect their territories to the detriment of voters and democracy.

Redistricting for decades was a little-known aspect of the American electoral system, a process done "in smoke-filled rooms behind closed doors," as an election law expert puts it.

That process, however, has always been incredibly important to the entire democratic system. Done once every 10 years, redistricting is the redrawing of a state's legislative maps so that voters are split evenly and fairly among congressional and state districts. Voters will then choose from candidates running in those districts. Each voter gets to pick one candidate for Congress and two candidates for state representative every two years, and one state senator every four years. The winning candidate secures the most votes in the district where they are running.

Pennsylvania is currently going through redistricting, and fair election advocates are urging political parties to stay out of the process.

Redistricting is supposed to be done in a way that splits up a state's population evenly, contiguously, and in the simplest ways possible (without creating bizarrely shaped districts). Redistricting should also take into consideration communities of similar interest as much as possible.

That's what is supposed to happen, anyway. For decades, politicians of both major political parties have used redistricting as an opportunity to solidify their own power and re-election prospects. That's called gerrymandering. It can make Pennsylvania look like this:

But fair election advocates now hope the era of gerrymandering could be coming to an end.

"We’re in a very different environment now that doesn’t have precedent," elections attorney Ben Geffen of the Philadelphia-based Public Interest Law Center said. "Part of that is the political animosity in Harrisburg (Pennsylvania), and all across the country. But also part of that is this has the public’s interest like never before. That has changed a lot in the last decade. It has gained a lot of mass interest, which is great. It's a credit to groups like Fair Districts PA, which has been doing grassroots organizing for years. Redistricting is no longer going to happen in a smoke-filled room."

What is the Purpose of Redistricting?

State Republican lawmakers, who control both chambers of the General Assembly, are unhappy with the initial map approved by the panel last month. They are trying to pass new legislation to completely change the process and give more power to their own party.

Is this a new attempt at gerrymandering? Some fair election advocates believe so.

A new map for congressional districts are supposed to be drawn up by the state Legislature and approved by the governor. That has run into some issues because the Republicans in control of the Legislature are having a hard time coming to an agreement on the map with Democratic Gov. Tom Wolf.

With both maps still undecided, the Pennsylvania Department of State has put a deadline of Jan. 24 on finishing the work in order to smoothly prepare for the May 17 primary in the spring. Geffen, the election attorney with Public Interest Law Center, believes that the primary could still be held as scheduled even if redistricting is wrapped up by mid-February.

How does This Affect Pa. Voters?

If districts are drawn fairly, there will be more competitive elections. That gives voters more choices from which to choose their elected leaders. Gerrymandering over the last few decades has been blamed for the widening partisan divide in Congress, in state legislatures and down to town hall meetings.

"The current process is redistricting gone wrong—a process driven by partisan politics, mapping technology, big data, and outside money," according to Fair Districts PA. "The result is gerrymandering: the practice of manipulating voting districts to benefit parties, not people. Gerrymandered districts give voters less voice and less choice, and we get polarization instead of problem-solving in Harrisburg and Washington."

What is the Difference Between Redistricting and Gerrymandering?

Redistricting is supposed to follow four guidelines required by the Supreme Court:

Other considerations, according to Geffen, include keeping communities of interest together.

Within the universes of those four criteria, there are a lot of ways you can draw a fair map," Geffen said. "There are also ways to draw an unfair map, drawn in a way to engineer to benefit one political party."

That's called gerrymandering, and it's led to some unusually shaped congressional districts over the years. Gerrymandering becomes more likely in states where one political party controls both the executive and legislative branches of government. In 2010, Republicans controlled Pennsylvania's Legislature at the time a Republican, Tom Corbett, was governor.

The maps approved by Corbett and his GOP lawmaker colleagues lasted until legal challenges filed in 2017 forced a new congressional map to be drawn before the 2018 congressional midterm election. The General Assembly and Gov. Tom Wolf could not come to an agreement on newly drawn congressional districts, so the state Supreme Court hired a Stanford University constitutional law professor to do it.

Gerrymandering disenfranchises some, or all, voters by carving up a state's population in legislative districts that provide an advantage to political parties instead of the people, experts say. If elected officials think of their re-election chances and keeping their party in power ahead of what's fair to voters, it leads to a breakdown of the democratic process. It also blocks certain people from having a say in the way their country is run.

"One big proof that the newly drawn maps were fairer is that prior to 2018, we had 18 men representing Pennsylvania in Congress," Geffen said. "After the midterms, there were four women in Congress from Pennsylvania."

Indeed, prior to 2018 when a women's wave swept over Pennsylvania, and the country as a whole, only seven women had ever represented Pennsylvania in Congress. In 2018, four women won congressional seats.

Geffen added, "Ultimately in the ideal world, a map would be drawn to create competitive and responsive districts to voters. If there is a strong red shift leading up to an election, or a strong blue shift, voters would elect more Republicans or Democrats in that year."

How Can Gerrymandering Be Stopped?

Independent commissions, devoid of influence from political parties and elected officials, are the best way to avoid gerrymandering of legislative districts, according to fair election advocates.

Fair Districts PA, the state advocacy group for equitable redistricting, called the legislative maps drawn up by the five-member Legislative Reapportionment Commission in December "far more fair than House and Senate maps of the past few decades."

The group hailed the panel for its leadership by the Supreme Court-appointed chairman, Mark Nordenberg. He is chairman of the University of Pittsburgh's Institue of Politics, and former university chancellor. 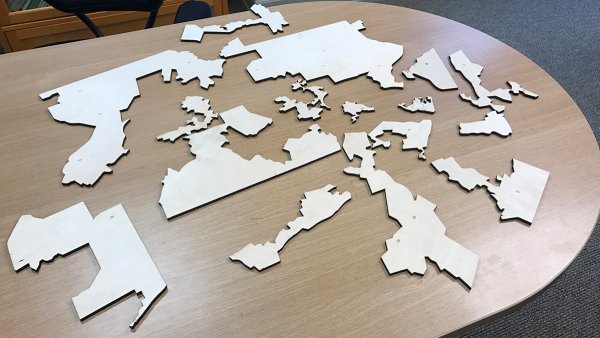 The maps "provide for greater representation of minority communities, are on average more compact than current districts, and have far less partisan lean than our current maps," Fair Districts PA said in a statement on Jan. 10. "While several districts in the current House map are not contiguous, we see no non-contiguous districts in the preliminary maps, and fewer split counties and municipalities."

The group said it is urging lawmakers to relinquish redistricting power in Pennsylvania moving forward.

"As long as legislative leaders have a substantial say in the drawing of district lines, the politicians will still have a larger say than the people in deciding how districts are drawn," Fair Districts PA said.