Updated as of 4 p.m. Tuesday: At least 4,950 people have been infected with COVID-19 throughout Pennsylvania, almost 19,000 in New Jersey and at least 264 in Delaware

Even with almost all of three states staying at home except for the most essential work, Pennsylvania, New Jersey and Delaware are seeing big increases daily in the number of diagnosed cases of coronavirus.

Pennsylvania Gov. Tom Wolf said Monday the state's schools and businesses will remain closed "indefinitely" as the state works to slow the spread of the new coronavirus. 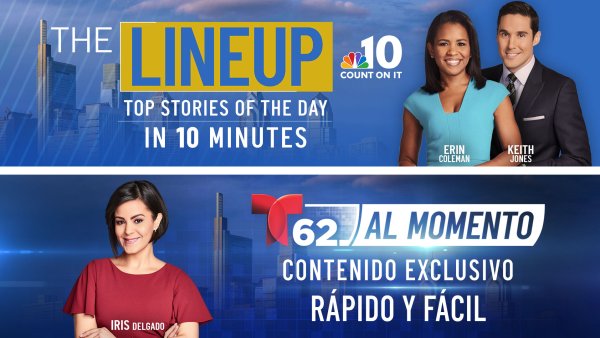 How to Watch Streaming News Updates from NBC10 and Telemundo 62

"Our business and school closures will no longer have a set date to resume normal operations," he said in a statement.

In addition to those closures, there is a stricter stay-at-home order in place for many counties, including those surrounding Philadelphia. Monday, Wolf said that would remain until April 30 and added Carbon, Cumberland, Dauphin and Schuylkill counties to that order, which means Pennsylvania now has 26 counties under a stay-at-home order.

Tuesday, the number of cases in Pennsylvania neared 5,000 after hundreds of new COVID-19 cases were reported. State and county officials said 70 people have died.

Delaware has not been spared, either. Officials there have reported seven deaths as confirmed cases reached at least 264. Gov. John Carney also ordered Sunday that out-of-state travelers entering Delaware must immediately self-quarantine for 14 days.

The new numbers indicate that the virus shows no signs of abating, despite drastic measures taken to slow the spread.

Here are all the cases in our area in which people have tested positive for the new coronavirus, based on state and county health department data.

State and county tallies may differ, because some locations release numbers before the state does; in those cases, we use the county data. This list will stay updated.

We also have a map and numbered list at the very bottom of this article.

On Tuesday, city health officials said at least 1,315 people had tested positive for the coronavirus.

Fourteen people have died of the virus in the city.

Among the people infected are dozens of health care workers, at least one Department of Corrections employee and one inmate of a city jail, though officials would not say which jail.

And, he said, the virus has been reported in every Philadelphia zip code. "It's entirely clear that this virus is everywhere in the city," Farley said Monday.

The region now has at least 20 testing sites for coronavirus, including the large drive-thru site in South Philadelphia. However, people must meet strict criteria to be tested.

Doctors must send you to testing at most sites. The Citizens Bank Park site is only for people with symptoms who are health care workers or are over age 50. The site is turning away people who do not meet the criteria.

Meanwhile, Mayor Jim Kenney issued a stay-at-home order for the entire city on March 22, his most dramatic effort yet to to slow the spread of the novel coronavirus. The order went into effect March 23 at 8 a.m.

Kenney and other members of the U.S. Council of Mayors have signed a letter to the federal government asking that $250 billion in federal aid be sent directly to cities, not to states.

"I think it's clear that the federal response has been deficient, with mixed messages and very slow actions," Kenney said.

Mongtomery County reported two additional deaths from the new coronavirus Tuesday. Two men, one 75 and one 66, from Horsham Township, died; they each had underlying medical conditions that made their health more fragile.

The first person who died was a 72-year-old man from Abington Township. The man, who had been hospitalized for several days, died on March 21. The second coronavirus-related death in Montgomery County was announced on March 25: a 84-year-old Abington Township man with underlying health issues.

County officials reported the sixth death from the new coronavirus Monday: that of an 82-year-old woman from Springfield Township who died while hospitalized.

There are now 570 people who have tested positive for coronavirus in the county.

Dr. Valerie Arkoosh, chair of the Montgomery County Board of Commissioners, said the county has moved to a "community spread model" when investigating new COVID-19 cases and will no longer report contact tracing or presumed route of exposure. This means health officials in the county are now assuming that any new COVID-19 case was exposed to it within Montgomery County.

A new testing site opened March 21 at Temple University's Ambler campus in Upper Dublin Township. Testing is for people who had known or suspected direct contact to a person with COVID-19, anyone with a recommendation from a doctor or healthcare provider and anyone experiencing a loss of taste, loss of smell and stomach issues.

A coronavirus testing site at Temple University's Ambler campus in Montgomery County expanded its criteria to include people dealing with stomach issues or a loss of smell and taste. It comes after doctors revealed new symptoms associated with COVID-19. NBC10's Aaron Baskerville has the details.

You can find more details on the Montgomery County testing site, including how to register, here.

A testing site in Montgomery County, which has been hit hard by the coronavirus pandemic, opened Saturday. There are strict criteria for who should be tested, and people who want to go there must register first.

Among the early cases diagnosed in the county is that of a 35-year-old police officer at the Lower Providence Police Department who lives in Perkiomen Township. Also among Montgomery County's cases are a cardiologist working at the Children's Hospital of Philadelphia's King of Prussia Specialty Care site who saw multiple patients during the week of March 1 after overseas travel, CHOP said.

Six deaths and at least 364 cases of the new coronavirus have been reported in Delaware County as of Monday.

The latest deaths were a 56-year-old man from Yeadon and a 65-year-old Springfield Township man, officials said.

Also among those who died: a 70-year-old woman from Ridley Township and that of a 63-year-old man from Middletown Township. Previously, an 85-year-old man and 86-year-old woman had died of the disease; both had been hospitalized at the time of their death.

Residents or organizations who want to donate protective and medical supplies and equipment to the county can call 1-800-253-3102 or email eoc@delcodes.org.

At least 159 people were reported as infected in Chester County, which reported its first death on Monday. The 89-year-old man who died lived in Willistown Township and had a number of underlying medical conditions.

The county’s health department is reassuring residents that helping neighboring Delaware County will not affect service to Chester County residents.

"I do want to reassure all Chester County residents that this move will not in any way diminish the excellent services that our health department provides to us all," said Marian Moskowitz, chair of the Chester County Commissioners. "After all, we are all in this together."

At least 286 cases of COVID-19 have been reported in Bucks County, and three people have died.

One of the victims was a woman in her 90s withsevere and longstanding pulmonary issues. Another, a man in his 80s, also had chronic underlying conditions. Both died in hospital intensive care units.

On Saturday, a man in his 60s with underlying health conditions died of the virus.

“We’ve known, from the experiences elsewhere in the commonwealth, the country and in other countries that once you have community spread of coronavirus, some of our most vulnerable people may die from this disease,” said Dr. David Damsker, director of the Bucks County Health Department. “This is what we are seeking to limit through our social distancing measures.”

He noted, however, that most Bucks County cases had resulted in only moderate symptoms.

There were at least 110 cases in Berks County as of Tuesday.

There are now four deaths and 272 cases in Lehigh County.

Officials said one diagnosed patient is a "colleague" at Lehigh Valley Hospital's 17th Street location. The person is out of the hospital and self-quarantining at home.

The person has not been at LVH-17th Street since March 9.

As of Tuesday, at least 245 people had tested positive in Northampton County, and there have been five deaths in the county.

New Castle County reported 156 infections and three deaths, the most recent of which was announced Sunday. The 79-year-old woman was not hospitalized and had underlying health conditions. Officials said she was exposed while traveling to another state with COVID-19 cases.

Another death was reported the day before: that of a 76-year-old man who was not hospitalized but did have underlying medical conditions.

An 86-year-old man who lived in the Little Sisters of the Poor Jeanne Jugan Residency in Newark was the first person to die a Delaware long-term care facility. The man also had underlying medical conditions.

In addition, six residents of the nursing home tested positive for the novel coronavirus.

Delaware also announced Sunday that a Wilmington Police officer tested positive for COVID-19. The officer, who has not been at police headquarters since March 15 and is at home in self-isolation, is the third city employee to test positive.

A cluster of cases are also connected to the University of Delaware, where a professor became Delaware's first confirmed case of coronavirus.

Starting Saturday night, Delaware beaches are off limits until May 15 -- except to walk dogs where that is permitted. Delaware Gov. John Carney says he may order further restrictions on businesses.

Kent County had at least 27 confirmed COVID-19 infections as of Monday. Two people have died in the county: a 74-year-old man and a 77-year-old man. Both had been hospitalized and had underlying health conditions.

Sussex County had at least 81 confirmed cases of the coronavirus as of Monday. And the county has seen its second death, a 92-year-old woman who had significant underlying health conditions, state health officials said.

A 66-year-old Sussex County man earlier died while hospitalized out of state.

At least 228 cases of the new coronavirus have been reported in Camden County, which has announced three COVID-19 deaths.

Officials also announced their planned testing site at Camden County Community College in Blackwood has not opened due to a lack of testing kits. They do plan however on opening a testing site at Cooper's Poynt Park in Camden on Wednesday. The site will run Monday through Friday from 12 p.m. to 4 p.m. and will be available to Camden County residents with permission from a healthcare provider.

At least five people have died and 202 have been infected in Burlington County, including diagnoses at Joint Base McGuire-Dix-Lakehurst.

The state is working to reopen the shuttered Underwood Memorial Hospital in Woodbury, New Jersey. The facility, which could open in a month or less, would add 300 acute care beds to the state's total.

Cape May County has reported 12 cases of the new coronavirus.

The first person to test positive in the southernmost county in New Jersey was a 30-year-old man visiting from New York City, Cape May County health officials said.

Local officials used the first test as "a vivid reminder" for out-of-state visitors to stay home.

At least 31 people in Atlantic County have been infected with coronavirus, state health officials reported.

The county also notified the Borgata Casino in Atlantic City that one of its table games employees tested positive, according to the Borgata's CEO in a letter to his employees Friday.

Ocean County currently has 1,022 cases of the new coronavirus. State health officials said a man in his 70s died due to the virus.

Cumberland has reported one death and at least 18 cases of the new coronavirus.

Salem County has reported 12 cases of the new coronavirus.